The University of Georgia’s 86 weather stations record data 24 hours a day, seven days a week across Georgia. Farmers use this data to help them determine when to plant and treat their crops. During Hurricane Michael, the system helped the National Weather Service to track the storm and save lives.

“Many of the National Weather Service’s sites stopped working as the storm moved through the area,” said Pam Knox, an agricultural climatologist with the UGA College of Agricultural and Environmental Sciences and interim director of the university’s weather network. “Afterwards, the National Weather Service specifically mentioned to me how much they appreciated being able to use our network data to monitor the storm conditions when their own stations went down.”

Formally named the Georgia Automated Environmental Monitoring Network, the UGA system records air temperature, rainfall, relative humidity, solar radiation, wind speed and direction, soil temperature at depths of 2, 4 and 8 inches, atmospheric pressure and soil moisture. Data from the stations are summarized at 15-minute intervals, and at midnight, a computer on the UGA Griffin campus calculates a daily summary of that information.

The National Weather Service has a weather tracking system, but according to Knox, severe weather is often “localized,” which makes UGA’s data especially valuable. In the case of the recent hurricane, the National Weather service relied on the wind speed and pressure data from UGA. The service has also used the stations’ precipitation data during flash flooding events.

“During Hurricane Michael, the National Weather Service, Federal Emergency Management Agency and the National Hurricane Center all wanted our data, and they wanted it yesterday,” Knox said. “We were getting bombed with requests and our weather network was the only one reliably operating in the area being hit by the hurricane.”

For meteorologists and climatologists, the more data you can get, the better, Knox said. During Hurricane Michael, the UGA stations were some of the only sources of data in more remote parts of the state. One of the automated stations in Donalsville in Seminole County recorded the strongest gust of wind measured in Georgia during the storm. The 115 mph gust will be included in the final storm report put out by the National Hurricane Center, and it may not have been recorded except for the UGA station.

The morning of Oct. 11, after Hurricane Michael had traveled across southeast Georgia, all but two of the stations were online and operating normally.

“The stations themselves were fine, but cell service in the area was disrupted and we could not communicate with the stations until it came back online,” Knox said. “Fortunately, we were able to recover the full datasets from those stations once communication was restored.”

The weather station in Sasser lost its wind vane and a power outage on the UGA campus in Griffin, Georgia, where the weather data is stored and analyzed, slowed down the ability to share data for a few hours, Knox said. Each weather station has a battery-operated backup system that can store up to four months of data.

Knox attributes the weather stations’ success to equipment and personnel. The stations use solar panels which limited disruptions due to power outages, a widespread problem along Hurricane Michael’s path.

“The UGA support staff who keep the network running did an outstanding job taking care of problems as soon as they happened,” she said.

“Weather impacts every segment of our nation’s economy and is key to promoting safety, efficiency, continuity and productivity,” he said. “The University of Georgia has been a strong partner in the National Mesonet Program since its inception a decade ago, and we look forward to continuing to extend that relationship going forward.”

The National Mesonet Program is an observational weather network funded by the National Oceanic and Atmospheric Administration.

UGA weather data is in high demand, but Knox says the system runs “on a shoestring budget” with the largest expense being personnel. Each weather station costs $12,000 to establish and about $2,000 a year to maintain. Knox and five UGA employees make up the weather station staff. Several commodity groups contribute to the cost of running the network, she said.

For more information on the weather network, visit www.weather.uga.edu. 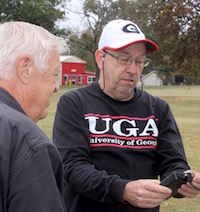