Rice has been a staple food crop around the world for millennia, but little was known about the wild origins of the world’s most widely produced crop until the recent mapping of the genomes of 13 ancestral rice species.

Scott Jackson, director of the University of Georgia Center for Applied Genetic Technologies (CAGT) in the College of Agricultural and Environmental Sciences, helped to map these genomes as part of the international Oryza Map Alignment Project (OMAP).

The knowledge gained through genome mapping sheds light on rice’s evolution in the wild 15 million years ago and its domestication by farmers 10,000 years ago. It also allows plant breeders to incorporate resilience traits from wild rice species in the genus Oryza into cultivated varieties.

The work will appear in the June 2018 issue of the journal Nature Genetics and is online now.

Jackson, who recently helped to map the genome of cultivated peanuts in part by tracking the domestication and evolution of its wild relatives, has been working to decode the genomes of wild rice varieties since his work as a postdoctoral researcher in 2000. At UGA, he, postdoctoral researchers Moaine El Baidouri and Dongying Gao, and doctoral student Aiko Iwata worked on the international rice project.

“I’ve been working on wild relatives of rice since I was a postdoc,” Jackson said. “Only when sequencing became cheaper and easier was it possible to sequence these genomes to uncover their histories as recorded in their genomes.”

Recent breakthroughs in genome sequencing and a wide-ranging international collaboration with plant scientists in more than a dozen countries allowed the team to sequence 13 of rice’s 21 wild relatives and unlock the genetic history of today’s rice varieties.

Through their work sequencing domestic rice’s ancestors, the researchers were able to pinpoint four separate domestication events in Asia and Africa, which means that the different types of rice the world enjoys today — sticky sushi rice, long-grain basmati rice, short-grain Arborio rice — were derived through multiple domestications from wild ancestors at different locations and times throughout history.

When ancient people were selecting for their preferred sticky, long-grained or short-grained characteristics in rice plants, they were also selecting for increased yield and lack of shattering traits.

Shattering is the process by which the plant spreads rice grains — its seeds — after the seed head becomes mature. Farmers wanted to harvest these grains before shattering occurred, so finding plants that didn’t shatter was key to domestication.

Sequencing the genomes of precursors to domesticated rice will enable scientists to uncover beneficial traits that may have been lost in this process, Jackson said.

Throughout their evolution, wild rice species have developed natural disease and insect resistance as well as drought and salinity tolerance. Some of these traits were lost in domestication, but they could be bred back into domesticated varieties to help farmers reduce their reliance on pesticides or cope with water shortages. 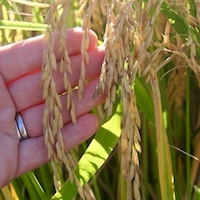