Weather conditions worsened during the latter part of the summer for dryland peanuts as little, if any, rainfall was recorded at critical stages of the growing season. Monfort estimates that as much as one-third of Georgia’s dryland crop has produced very little, and the crop is being severely affected by the drought conditions.

“We’re really wanting growers to look at these dryland crops, even though some may be only 115 or 120 days old, and see whether or not they should dig them or just leave them in the field,” Monfort said. “Some of our crop is in bad enough shape that there’s almost no point in digging them. There’s not a crop to dig in some places.”

In addition to the weather, this year dryland farmers are facing challenges including the lesser cornstalk borer, an insect that thrives in drought-like conditions. Treatments are ineffective without rainfall, so the pest has become a major problem. The damage inflicted by the lesser cornstalk borer can lead to Aspergillus flavus fungus, which often results in the growth of carcinogen aflatoxin. Underground white mold has also been more problematic this year. This is largely attributed to poor peanut field rotations, which farmers are resorting to in response to low commodity prices. Farmers are more inclined to produce additional peanuts because of the decline of cotton prices.

Due to these challenging factors, dryland farmers have to consider a plan B to compensate for not having a viable crop.

“Some of the questions we need to be asking are, ‘Do I really have a crop? Can I even make a crop?’ It’s probably a good thing that these growers start looking so they can prepare their insurance adjusters for what’s coming down the road,” Monfort said.

According to Monfort, almost half of Georgia’s peanut crop, which was more than 340,000 acres last year, is grown on dry land, or farmed without irrigation. Georgia’s peanut acreage this year is around 720,000 acres, with an estimated 324,000 acres being dryland peanuts.

Monfort classifies one-third of Georgia’s dryland crop as suffering through severe drought conditions, one-third as intermediate — those fields that might have a crop but are being impacted heavily by the drought — and one-third that looks “pretty good.” One-third in severe drought means that a little more than 100,000 acres are in precarious conditions at this stage of the growing season.

“We’ve got a lot that may be in a too-little-too-late kind of a situation,” Monfort said. “I have pulled up a bunch of plants so far that just don’t look that good.”

Georgia’s best chance for rainfall came on Friday, Sept. 2, when Hurricane Hermine moved through south Georgia and up the Atlantic Coast. While Hermine dumped as much as 5 inches in some fields, its impact was just as negative as it was positive.

“It helped a good portion of those (plants) that have peanuts on them that hadn’t matured out. As long as they didn’t come loose in the hull, they should continue to mature,” Monfort said. “Those intermediate and good sections may do all right, but the hurricane just caused more issues for the one-third of the crop that is ridden with disease and insect damage.” 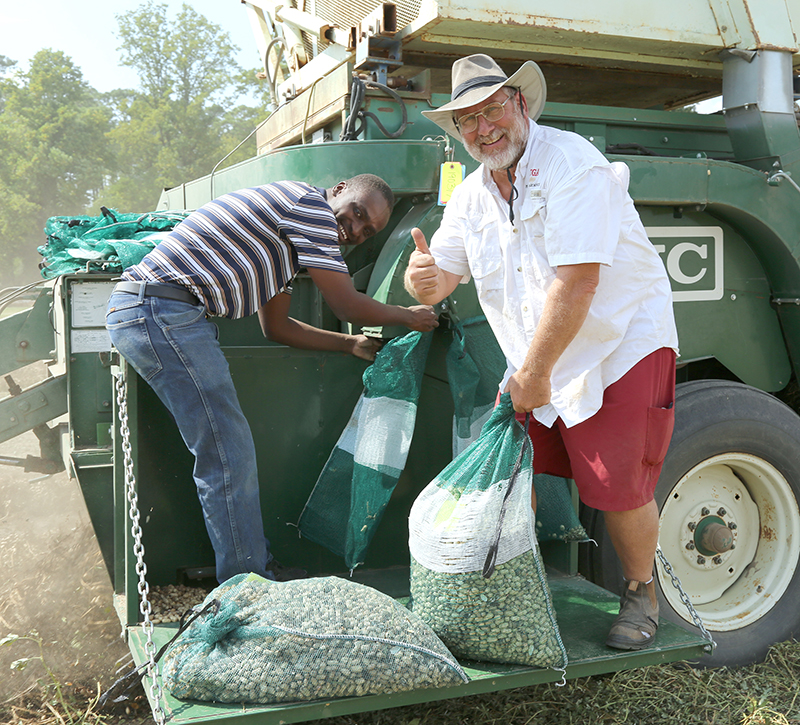