J. Scott Angle, former dean and director of the University of Georgia College of Agricultural and Environmental Sciences, has been inducted to the Vidalia® Onion Hall of Fame by the Vidalia® Onion Committee. Angle’s induction was announced during the committee’s annual awards banquet held on Feb. 6 at the Hawk’s Point Golf Club in Vidalia, Georgia.

Serving as CAES dean for the past 10 years, Angle led the college through a period of significant growth and help recruited several nationally and internationally recognized researchers to help broaden the scope and impact of the college's research.

He also strengthened the links between the college's research and Cooperative Extension units to ensure that farmers and other stakeholders in each of Georgia's 159 counties have access to the latest, research-based information. In September 2015, he left the college to accept the position of president and CEO of the International Fertilizer Development Center.

“We wanted to recognize Scott Angles’ contribution to the Vidalia industry, especially since the University of Georgia has played a key role in providing critical crop research and helping the industry to improve the flavor of our premium sweet onions,” Waters said.

Jason Herndon, the 2015 Grower of the Year, is from L.G. Herndon Jr. Farms, Inc. The family-owned-and-operated business averages 500 acres of Vidalia onions each year. Herndon manages the farm for his uncle, “Bo” Herndon Jr., who was named grower of the year in 2008.

“We began these awards in the 2015 crop year, so we could spread knowledge to producers on what we have learned from our recent research. Our crop quality lab has developed some new tools that will hopefully impact our entire industry in the near future,” said Cliff Riner, UGA Vidalia onion area Extension agent. “Samples submitted to the county Extension offices help us learn more, and they provide growers more information about their crop. We are learning a lot through our research and Extension efforts at UGA, and the entire Vidalia industry should be commended on their support of the University of Georgia.”

The Vidalia Onion Committee administers the federal marketing order that authorizes production research, marketing research and development and marketing promotion programs for Vidalia onions. This federal program along with Georgia state laws that protect the Vidalia trademark have provided a legal framework for the industry. For more information, visit VidaliaOnion.org. 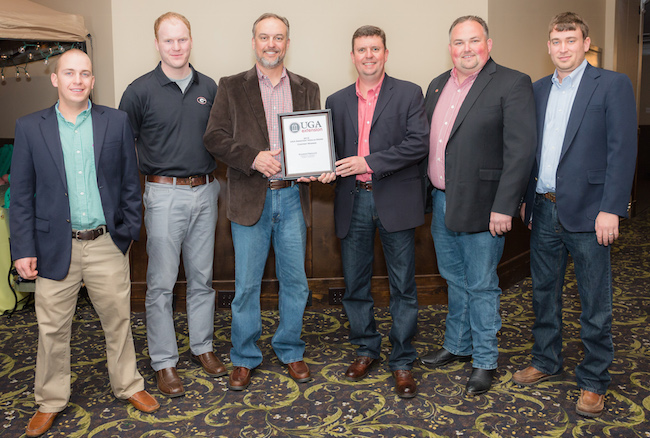