Georgia’s economy will be on the rise in 2016, fueled by population growth, resurgence of the housing market and major projects across the state, including two new professional sports stadiums planned for metro Atlanta. Georgians can also expect to continue to pay less for a gallon of milk, and for meat producers, exports look encouraging for beef and pork.

Cotton
A weak demand for cotton is contributing to prices hovering around 63 cents per pound, according to UGA cotton economist Don Shurley. A drop in demand has occurred over the past 10 years, and it doesn’t appear that will change in 2016.

It was reported in December 2015 that U.S. cotton exports for the 2015 crop year are expected to be 10.2 million bales, the lowest level since 2000. Fewer exports have contributed to the decrease in demand in recent years.

Despite prices that are not adding up to farmers’ wishes, Shurley expects U.S. and Georgia acreage to increase next year and, if weather cooperates, production that’s higher in 2016 compared to 2015. With the challenges facing Georgia’s cotton producers, Shurley offered words of advice: “Be patient and wait for 68 to 70 cents,” he said.

Cotton acreage in the U.S. dropped to 8.56 million acres last year, down 22.5 percent from the previous year and the lowest acreage since 1983.

Peanuts
Peanut acreage in Georgia and the U.S. increased significantly in 2015. U.S. acreage was up 20 percent, and Georgia acreage was up 31 percent, or 785,000 acres. The crop of Georgia's farmers excelled, yielding an average of 4,470 pounds per acre, the second highest total over the past several years.

However, an ominous outlook exists for Georgia peanut producers. Due to low prices for corn and cotton, peanut acreage is not expected to drop off significantly from last year’s total, despite the lack of storage space and the need to rotate peanuts with a different crop at least every three years in order to manage pest pressure. An increase in supply results in lower prices for producers.

Corn
Overall corn production acreage was slightly down in 2015, but the U.S. still had the largest harvest on record, according to UGA Center for Agribusiness and Economic Development Director Kent Wolfe. “With gas consumption down, the corn-for-ethanol market will remain stable, but corn feed demand from the meat industry will increase,” he said.

The price is currently below $4 per bushel, but agricultural economists predict that anything close to $4.25 per bushel will be a win for Georgia farmers.

Soybeans
Georgia acreage sown in soybeans will rise by 8 percent this year, while U.S. acreage will decrease by 1 percent, according to Wolfe.

“China is the largest importer of U.S. soybeans in the world, and their economy is slowing,” Wolfe said. “We expect soybean prices to decrease slightly.”

“Japan was the No. 1 importer of our beef, but now Australia exports more to Japan than we do,” Wolfe said. “Mexico’s economy is improving, so we hope to increase our exports there. The good news is that developing countries are beginning to upgrade their diets and demand more protein.”

Poultry
A number of countries, including China and Mexico, currently have bans on U.S. poultry as a result of the first case of avian influenza last year, Wolfe said. “That cost us significantly in the export market,” he said. “Our exports are now in limbo due to avian influenza, but we will see an increase in production of broilers due to demand in the U.S.”

The price that farmers receive for broiler chickens is expected to decrease by 4 to 5 percent in 2016, he said.

Pork
A 4-percent increase in pork exports is expected as more live and processed pigs are exported to Canada and exports to Mexico stay strong.

Dairy
Wolfe anticipates 2016 milk prices to “mimic” 2015 prices. “Milk prices went way, way up in 2014, but we will probably see the lowest milk prices we have seen in six years this year,” he said. “Hopefully, folks in the dairy industry will make a little bit of money this year.”

Forestry
The drive to become paperless and the increased use of technology have driven down the demand for paper in the U.S. The demand for pellets, which are produced in the South, remains high. Timber production, especially pine grade, is expected to stay high due to recent housing starts, Wolfe said.

Honeybees
The number of beekeepers across the nation is on the rise, as is the demand for queens and colonies. “Bees are in demand to replace colonies that have been lost to colony collapse,” he said. “And, in Georgia, we are shipping a lot of bees to California to pollinate the almond trees.”

Wheat
The number of U.S. acres devoted to wheat has trended downward since the early 1990s, according to Wolfe. “The world supply of wheat is rising, so U.S. prices are lower,” he said.

For a complete look at the 2014 Farm Gate Value report for Georgia, visit www.caes.uga.edu/center/caed. 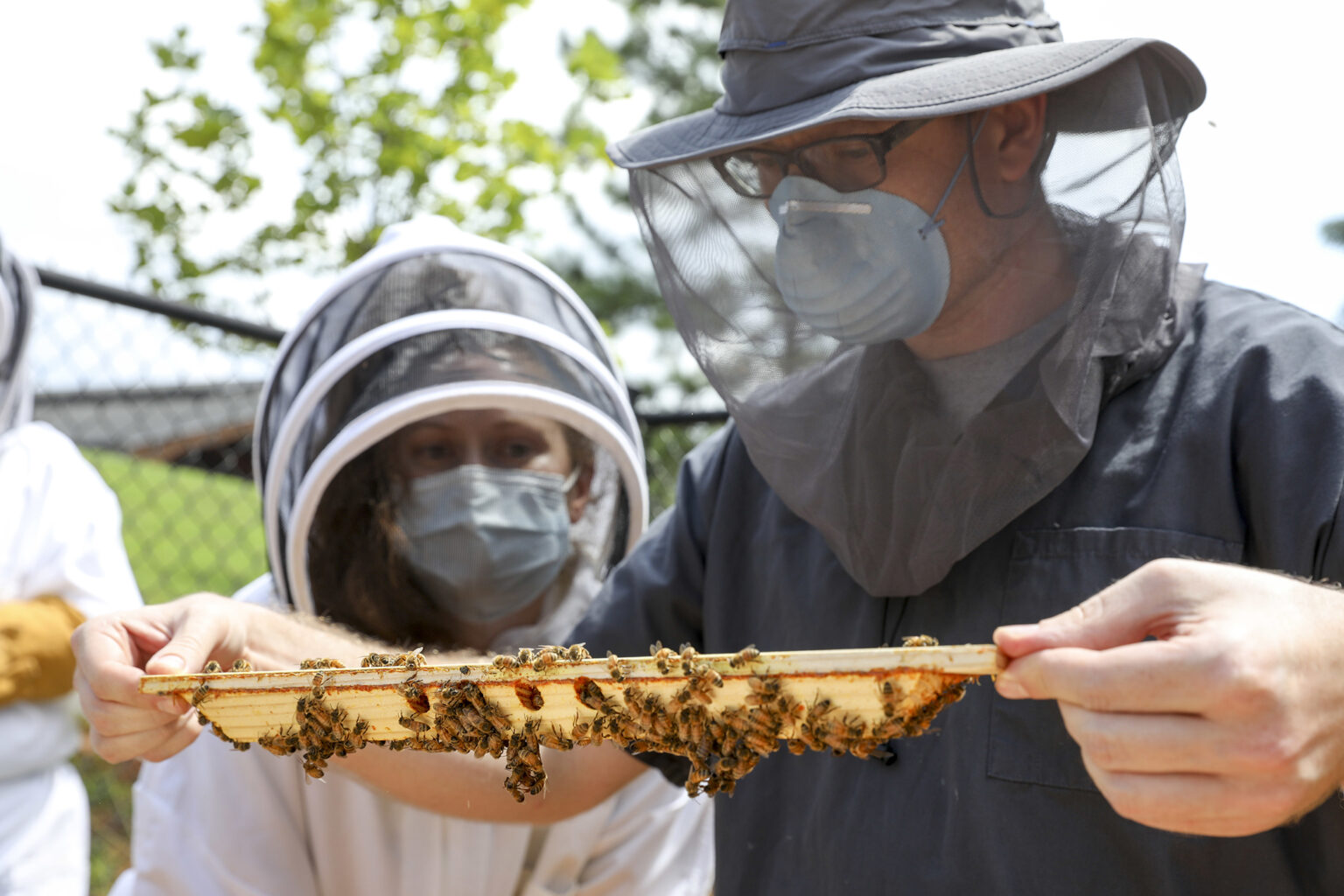 CAES News
New beehives added for veterinary training Posted on 08/20/20 by Alec Lee
Scientists have long known two facts about the world’s bee population: pollinating bees are vital contributors to healthy crops and a thriving ecosystem, and many bee species are under threat of extinction from pollution, disease and other factors.