Alumni of the University of Georgia College of Agricultural and Environmental Sciences impact every sector of the agriculture and natural resource industries in Georgia and around the world.

This year, the college’s alumni honored the impact of five of their most outstanding fellow alums at the CAES Alumni Association Banquet and Awards Ceremony on Sept. 25 in Athens, Georgia.

“From the farm field, to the board and exam rooms, our alumni are leaders in a variety of areas,” said Elliott Marsh, president of the CAES Alumni Association. “These awards not only allow us to recognize the accomplishments of our fellow alumni, but also the ways in which CAES has contributed to our collective success.”

Bo Warren, director of the Georgia Center of Innovation for Agribusiness, and Jimmy Forrest, a nationally recognized peach grower and owner of Dixie Belle Peaches in South Carolina, received the CAES Alumni Awards of Excellence.

Bo Warren
Before starting his career working with lawmakers to represent the interests of farmers, Warren studied agribusiness at the UGA College of Agricultural and Environmental Sciences. He joined the Georgia Department of Agriculture in 2011 to develop the department’s first business development division.

In his current position as director of the Office of International Trade and Domestic Marketing at the Georgia Department of Agriculture, Warren continues to foster international trade. He also works to support Georgia’s growing agritourism industry, develop markets for Georgia-grown products inside the United States and administer the Georgia Agricultural Tax Exemption program.

He also directs Georgia’s Center of Innovation for Agribusiness, working to identify new agricultural innovations and bring them into the marketplace.

Jimmy Forrest
Forrest, president of Dixie Belle Peaches, Inc., in Ridge Spring, South Carolina, graduated from the UGA College of Agricultural and Environmental Sciences in 1972 with degrees in dairy science and agronomy. He has since become a national leader in the fruit growing and packing industries.

After finishing college, he chose to move back home to South Carolina, where he converted a 1,000-acre, row-crop farm with 40 acres of peaches into 2,600 acres of peach orchards across Saluda, Edgefield and Aiken counties.

Forrest helped to shape the vanguard of peach production and packing for decades. He has also lobbied legislators and the courts to uphold farmers’ rights in regards to crop insurance and federal agricultural policy.

A past vice president of the South Carolina Peach Council, Forrest still contributes to the state council and to the National Peach Council. He also serves his local community through church activities, by supporting the downtown farmers market and by donating peaches to local food banks.

Megan Green
Green has worked with some of the finest performance horses in the world and now manages equine and large animal veterinary services at Merial, a global animal health company. She still remembers her days at the UGA College of Agricultural and Environmental Sciences.

A former CAES Ambassador, Green graduated with a degree in animal science in 2003. After her 2008 graduation from Tuskegee University School of Veterinary Medicine, Green interned at the Rood and Riddle Equine Hospital in Lexington, Kentucky. There she worked closely with a diverse variety of horses, including some of the finest performance horses in the world. She then earned clinical certification in equine acupuncture therapy.

In her current role at Merial, she travels nationally, working with a wide array of animal health professionals, keeping them aware of the latest treatments and therapies for horses and other large animals.

Travis Moore
Anheuser-Busch Brewmaster Moore has worked for Anheuser-Busch Inbev in Cartersville for the past seven years. Currently he holds the position of senior brewmaster. He is responsible for all aspects of safety, quality and production for the brewing operation.

From the classrooms of the CAES Department of Food Science and Technology to his first job at a small poultry and baked goods company outside of Athens, Georgia, it’s been a long road to Cartersville for Moore. Each step along the way helped to make him the national leader in food manufacturing that he is today.

Moore also takes pride in giving back to his community. An active member of Due West United Methodist Church and the Boy Scouts of America, Moore also supports the company’s efforts to donate canned drinking water to the American Red Cross. During his time with the company, Moore has helped improve recycling rates at the brewery and reduce both water and energy use.

Carmen Byce
From Afghani farm fields to National FFA Organization classrooms and beyond, Byce is an agricultural educator at heart.

After receiving a bachelor’s degree in agricultural education from UGA, Byce began her career as an educator in 2009. Two years later, Byce served in Afghanistan first as a solider and then as a Department of Defense civilian staff member.

A member of the Georgia Agribusiness Development team, she led agricultural programs in dangerous territory and helped marginalized groups, particularly women, develop the skills that would help them better feed their families and earn an income. During her deployment, she also found time to earn her master’s degree in Extension education from Iowa State University.

She is currently the program coordinator for Asia at the Borlaug Institute for International Agriculture at Texas A&M AgriLife. She also serves as the curriculum writer and facilitator for thousands of college students from Sigma Alpha and Alpha Gamma Rho chapters throughout the country.

For more information about the CAES Alumni Association, visit caes.uga.edu/alumni/CAA. 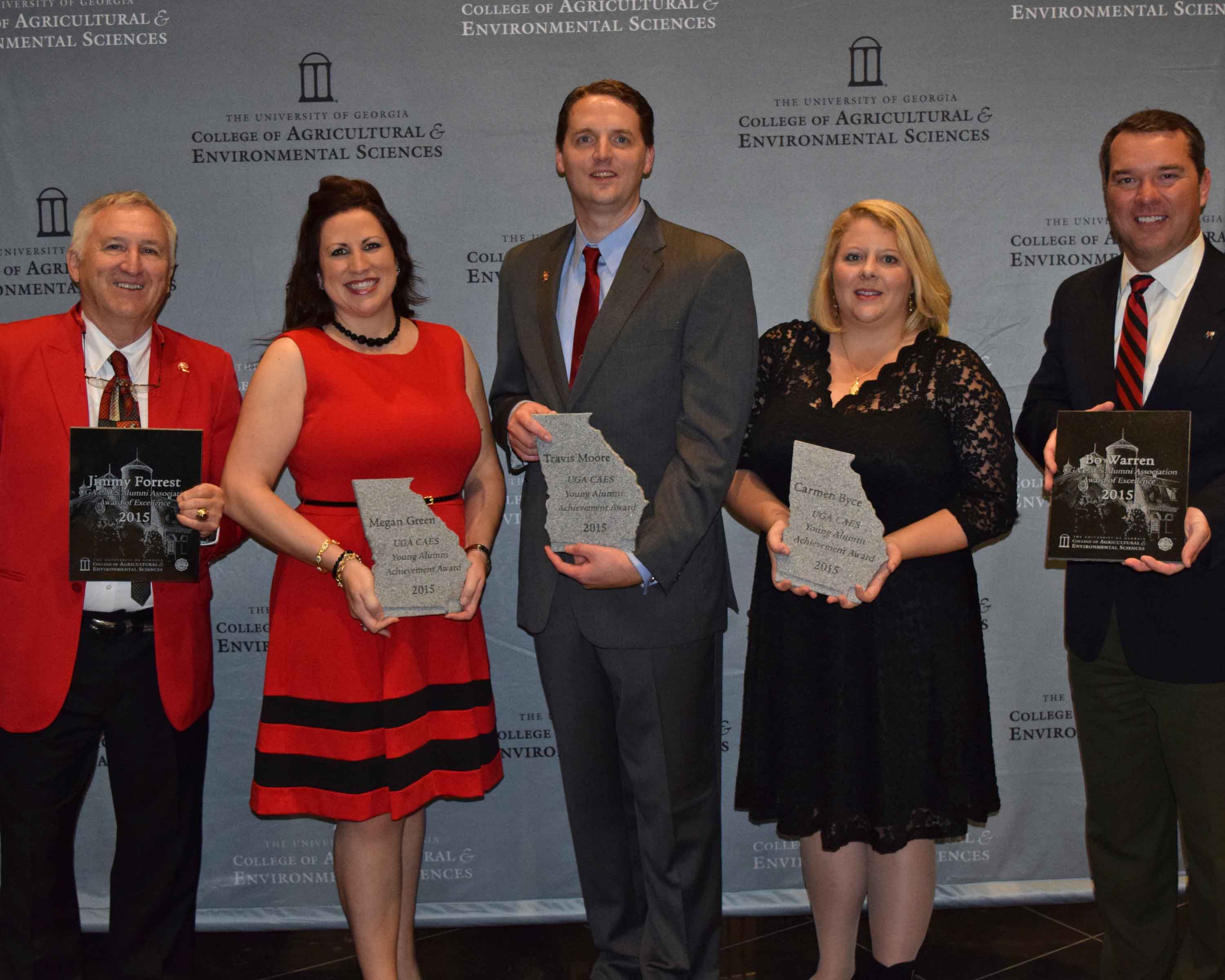