April 2015 was much warmer and wetter than normal in Georgia

April 2015 was much warmer and wetter statewide than is usual for the month. The wet conditions caused delays in planting and contributed to some crop disease pressure, while the warm conditions accelerated the growth of plants, like corn, that were already in the ground. While statewide statistics will not be available until later this month, this April is expected to be one of the warmest Aprils on record for Georgia, coming close to the record of 67.9 degrees Fahrenheit set in 2002.

The high temperature records were enough to put some individual National Weather Service (NWS) reporting stations in the top 10 rankings for average temperature for April. According to the April summary provided by NWS in Peachtree City, Athens was the sixth warmest station on record, tied with Atlanta. Columbus was 12th warmest, and Macon was the 14th warmest on record.

The highest single-day rainfall, according to Community Collaborative Rain, Hail and Snow Network (CoCoRaHS) stations, was 3.70 inches received northeast of Midway in Liberty County on April 29, followed by 3.48 inches received northeast of Nelson in Pickens County and 3.46 inches received south of Nahunta in Brantley County on the same date. The highest monthly total rainfall was 12.05 inches, observed near Stockbridge in Henry County, followed by 10.42 inches observed near McDonough in the same county.

After a slow start to the severe weather season earlier this year, Georgia experienced plenty of severe weather in April. Severe weather was observed somewhere in the state during one five-day stretch. An EF-1 tornado was observed on April 3 in Dade County in far northwest Georgia. Several additional tornadoes were observed on April 19-20 across the state. A description of the events can be found at www.srh.noaa.gov/ffc/?n=20150420_severe_weather and nws.weather.gov/blog/nwsjacksonville/2015/04/20/.

The wet conditions caused delays in planting across many areas of the state. Winds and rain caused lodging and increased disease pressure in some crops. Harvest of ryegrass for hay and silage was also delayed due to the wet conditions, although pastures in general are doing well due to all the rain. The warm temperatures caused rapid growth in places where crops were already in the ground before the spate of wet days at the end of the month. Farmers were forced to use aerial spraying in some cases to get agricultural chemicals and fertilizer into the fields to help with corn and development of other crops. Some farmers may switch from corn to cotton for the last few acres due to the late planting.

The outlook for May shows a slightly increased chance of cooler and wetter conditions than normal. The three-month outlook shows that there are nearly even chances for above, below or near-normal temperatures for the next three months, but that wet conditions are likely to continue under the influence of the El Niño.

For more information, please see the Climate and Agriculture in the South East blog at blog.extension.uga.edu/climate/ or visit our new Web page at gaclimate.org. Please feel free to email your weather and climate impacts on agriculture to share on the blog to pknox@uga.edu. 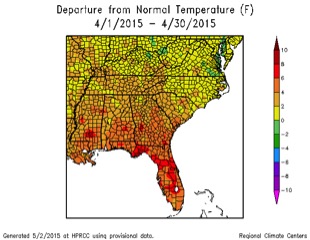