At Rock Eagle 4-H Center, Georgia students can get hands-on learning about pioneer life. Students pump water from a well, wash clothes on a washboard and gain an appreciation for modern day life. This year they planted vegetables that were served in the center’s dining hall.

Living history is taught at the center’s Scott Site, which includes a pioneer house, a well and hand-pump, a functioning smokehouse and a privy. Environmental educators teach students the typical chores of a pioneer family.

With the addition of the garden, students can now be taught how to use pioneer tools to plant seeds and learn how to water and tend a garden.

“Students may not become commercial farmers, but they might grow tomatoes at home one day,” said Matt Hammons, coordinator of Rock Eagle’s environmental education program. “We’d like to connect them to University of Georgia Extension and the help available from their county agent. As students learn to grow fresh food, they are able to improve their diet while providing for themselves a little more economically when they are adults.”

Hammons also hopes students learn that produce comes from the ground, not a supermarket. “I want them to understand that you have a season for plants; that you can’t grow tomatoes year round in Georgia, even though you can get them year round in the grocery store,” he said.

A little help from friends

Last fall, Hammons and the other environmental educators planted cover crops on the garden site to add nitrogen to the soil. Just like in pioneer days, no fertilizers or pesticides are used. The garden’s soil is amended with compost from Rock Eagle and from the student-run UGArden on the University of Georgia campus in Athens.

“We partnered with the UGArden staff, and they shared some resources and expertise with us on how we could implement gardening practices and get the kids in the garden,” he said. “They gave us some compost, starter plants and their time to help us get our feet off the ground.”

Plants don’t produce vegetables overnight. Students that came to the outdoor classroom last spring cared for the garden, but when the vegetables were ready to harvest, the students were on summer break. Rock Eagle’s environmental educators harvested the vegetables.

“Using the garden to teach students and to provide fresh, local produce to the dining hall is extremely exciting. It allows Rock Eagle to connect students to agriculture, which is the foundation of 4-H, as well as contribute sustainable resources to the center,” Kent said.

Too much of a good thing

Thanks to the Scott Site garden, Rock Eagle Food Operations Manager Sandra Gilley didn’t have to purchase cucumbers or cherry tomatoes for a month.

“We were pleasantly surprised by the amount of produce they brought us,” Gilley said. “I didn’t think we would get such a big quantity, and all the tomatoes came in at one time.”

Over the summer season, just less than 174 pounds of cherry tomatoes and 64 pounds of large tomatoes were delivered to the dining hall.

Having too many tomatoes was a problem for only a few minutes. Gilley and her staff quickly used them on the salad bar, pickled them and also made some new tomato-based dishes they froze. “Now, we’ll be able to enjoy the fruits of the garden this winter,” she said.

The odd colors of the heritage tomatoes actually encouraged Rock Eagle summer campers to try them. “Cherokee tomatoes are dark purple. The children really liked that, and the cherry tomatoes they brought us were yellow and light red,” Gilley said. “The colors seem to make the kids want to try something new.”

The dining hall guests consumed more than 222 pounds of cucumbers, 21 pounds of okra, 18 pounds of peppers, 9 pound of beans, 79 pounds of squash and nine watermelons.

Gilley said finding local produce for the dining hall is often a challenge. “The garden helped us meet the challenge and helped us include as many fruits and vegetables as we could,” she said.

The abundance of squash was used in the fresh salad bar, casseroles and veggie trays.

“We really saw an increase in interest in the salad bar because of the produce from the garden. Sometimes the kids will look at a new food item, but not take it,” Gilley said. “When you are paying retail price, it makes it cost prohibitive to try new dishes and experiment with new recipes.”

The garden didn’t produce enough watermelons to replace all the fruit needed in the dining hall, but it did supplement the other Georgia grown produce Gilley orders. Produce from the garden was also used for Rock Eagle off-site catering events.

Additions in the future

“We’ve really enjoyed getting all the free, fresh produce. We only partook of all of the labor the EE staff put into growing the garden,” she said. “It has also created some camaraderie and some synergy on site with the staff.”

Hammon hopes to add a small garden site behind the dining hall for convenience. The Scott Site garden is a short hike from the main 4-H center.

In the future, sorghum may also be planted and processed in a working sorghum mill on the site. Kent also hopes to expand the garden by planting nontraditional and traditional plants. “I want the kids to see a diversity of plants,” she said.

This year’s harvest was plentiful compared to last year’s, which was devoured by wildlife early in the season. A temporary fence kept the deer away this year, however, and plans are in the works to install a cedar split rail fence customary of the time period.

“We haven’t knocked it out of the park yet, but we will. We want to integrate other parts of agriculture into the garden as well as Master Gardeners, 4-H clubs and the community,” Hammons said. “We’d like to become a teaching garden and even work with the local high school students.”

The environmental education program was implemented at Rock Eagle in 1979. It was later expanded to include four other 4-H centers across the state. The five centers currently serve more than 40,000 students annually, making it the largest residential program of its kind in the nation. As of spring 2014, the Georgia 4-H environmental education program has served more than 1 million participants. The program has been designated a state and national learning model, drawing students and teachers from more than 500 schools and six southeastern states.

Sharon Dowdy is a news editor with the University of Georgia College of Agricultural and Environmental Sciences.
Authors:
Sharon Dowdy
Experts/Sources:
Matt Hammons 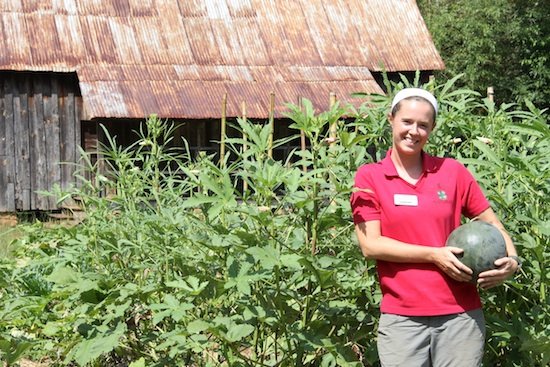 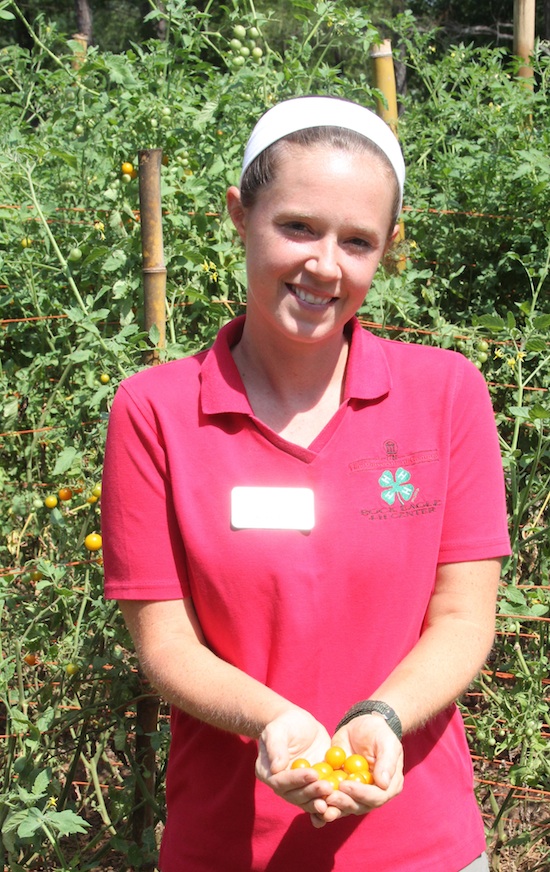 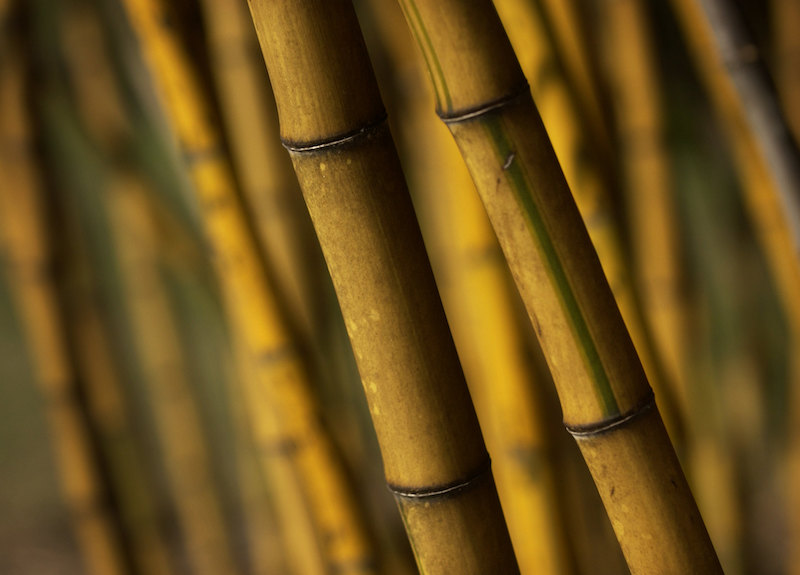 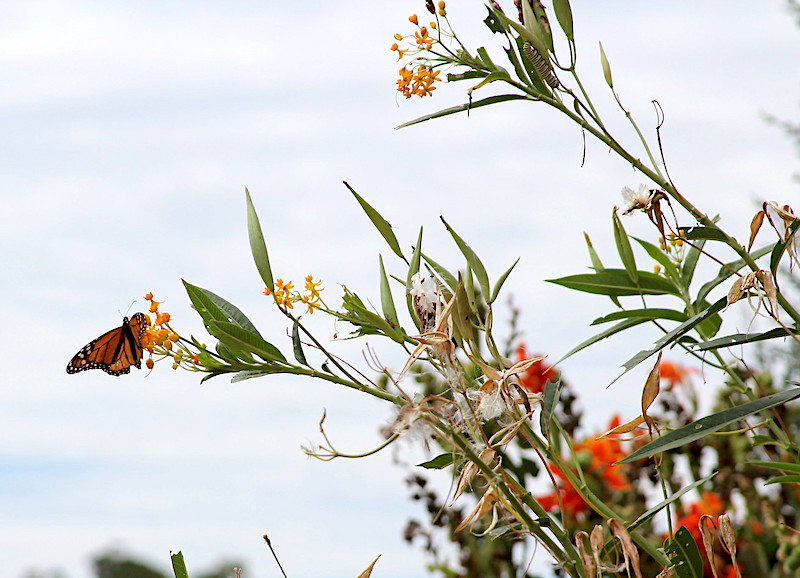 CAES News
Monarch butterflies migrating through Georgia now Posted on 10/23/19 by Becky Griffin
The time of the year has come when Georgians look to the sky to watch for signs of Monarch butterfly migration. These butterflies are on their way to the Sierra Madre of Mexico to overwinter on the oyamel fir trees of the area.