Of the more than 170,000 acres of Georgia farmland devoted to growing vegetables, only 3,000 acres are dedicated to growing organic produce. The numbers are small, but these producers are finding demand is high in their niche market.

Most organic growers sell their produce at farmers markets in metro areas or to upscale restaurants operators. Organic growers also sell to a growing number of consumers who prefer chemical-free food.

Plant some for the worms, too

Becky Douville of Able 2 Farm in Fayette County learned to grow organically by taking classes from Georgia Organics, Inc. She also learned at the feet of Lester Bray, considered a gardening guru in Fayette County.

“Mr. Bray taught me things like how to plant enough tomatoes to share with the horn worms,” she said. “This way I don’t have to spray, and I still have enough for the markets I supply.”

Douville isn’t a certified organic grower but grows her crops in a sustainable way. She has developed her own style by meshing Bray’s methods with what she learned from University of Georgia Master Gardener classes and Georgia Organics classes.

She grows tomatoes, watermelon, cantaloupe and cucumbers and sells them to markets in Fayetteville and Fairburn, as well as Atlanta’s Emory University Farmers Market and Trinity Community Ministries.

“I feel like a stockbroker,” she said. “I have all my cantaloupes sold before they even leave the field. And that’s about 300 melons.”

To help farmers like Douville, UGA Cooperative Extension horticulturist George Boyhan conducts research for organic crops. For the past 12 years, he was stationed in Statesboro, where he focused on Vidalia onions, working with both conventional and organic growers. Georgia producers started growing onions organically in 2003.

Onions are the largest single vegetable grown for the organic market in Georgia. Blueberries are No. 2.

Weeds are the biggest hurdle

Organic growers now get yields close to those of conventional growers. Weed control is their largest drawback. Organic-onion growers must use cultivation equipment and extensive manual labor to control them, he said.

As a reward for their extra work, organic growers get a premium price. “The highest price I’ve seen for organic onions is $45 a box,” Boyhan said. “Conventional growers get $20 a box on the high end and $12 a box on the low end.”

Now working on the UGA campus in Athens, Boyhan researches other organic crops and teaches College of Agricultural and Environmental Sciences students the ins and outs of organic farming.

“I just completed a big trial on pumpkins, and we just released a new variety” called Orange Bulldog, he said. “It has a higher level of disease resistance.”

Conventional pumpkins grown in Georgia are very susceptible to aphid-transmitted diseases. “Orange Bulldog has higher disease resistance, and organic growers are limited in what they can use so it’s a good fit for them,” Boyhan said. “We’ve produced pumpkins organically on our research farm with both treated and untreated seeds.” In order to be certified as organic, a crop must be grown using untreated seeds.

“I’m interested in looking at how heirloom varieties compare to modern varieties particularly under organic growing conditions,” he said. “True heirlooms are seeds that have been passed down in a family from year to year. There are also heirlooms that are named varieties that can be traced back to the 19th century whose seeds can be bought from seed catalogs.”

Some consumers buy organics because they believe they are more nutritional than traditional crops. A government study in the United Kingdom revealed no difference in organic versus conventional crops in terms of health or nutrition, Boyhan said.

“It’s a mixed bag of research,” he said. “People should be eating more fruits and vegetables, period, no matter which way they are grown.” 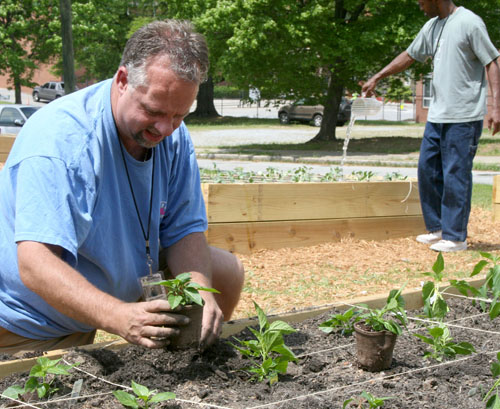 CAES News
Homeless find solace in mission's garden Posted on 05/26/11 by Sharon Dowdy
Looking over the tomato, okra, cucumber, squash and pepper plants, Joel Cooper is proud. The 46-year-old recovering addict is happy, too, to get his life back on track and for the opportunity to help others like him eat and live a little better. Cooper, and the other men who rely on the Atlanta Mission for food, will soon be eating fresh produce they’ve grown at the place they call their temporary home.

CAES News
Tomato time on 'Your Southern Garden' May 14 Posted on 05/12/11 by J. Faith Peppers
If you are ready for fresh summer tomatoes, don’t miss "Your Southern Garden" with Walter Reeves May 14 at noon and 6:30 p.m. on Georgia Public Broadcasting.